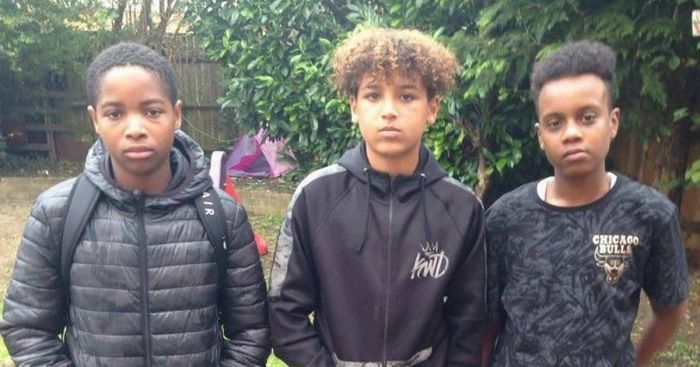 They have doe eyes and baby-fat faces. Their smiles are shy, their expressions nonchalant. They seem like any other awkwardly innocent middle-schoolers on the brink of puberty.

But these kids have quite a story to tell.

On September 21, 2017, 13-year-old Devonte Cafferkey, 14-year-old Sammy Farah and 12-year-old Shawn Young spotted a stranger teetering on the edge of a London overpass. Yelling “it’s not worth it,” they raced to his side and grabbed him, holding on until a passerby helped them pull the man to safety.

Not a typical feat for a trio of black youths who just happened to be walking home from school. Still, Devonte, Sammy and Shawn are in good company.

They’re part of a wave of Good Samaritans of color – young and old – who have endured great peril and risked their own lives to save others from danger.  Some have braved oncoming trains, others have climbed to unreasonable heights, and a few have rescued people from burning cars.

In a society where they are routinely stereotyped and marginalized, black men are emerging as fearless saviors, undaunted by the threat of death and unfazed by the notion that their efforts just might go unrewarded. Call them foolish, humanitarian or urban angels. No matter the label, they are performing remarkable feats of courage and love ⸻all while being victims of a peculiar psychological phenomenon.

Cognitive dissonance occurs when an entrenched belief remains long after that perception has been proven false. Example: MAGA-hat-wearing Trump supporters and other fanatics following the bidding of a leader who is guiding them to their own demise. Despite data and evidence to the contrary, those who see through the lens of cognitive dissonance are unable to recognize anything that is in opposition to their prevailing mental programming or their own stubborn attitudes. They cling to dead viewpoints. They tend to denigrate other ethnic or religious groups. They spew venom. They tightly seal up their minds. Never mind that the objects of their scorn may have made major contributions to society. Under the grimy microscope of cognitive dissonance, they are viewed as violent and untrustworthy.

It does little good to tell a person with this thought pattern that of the 154 mass shootings committed between 2012 and 2018, not a single gunman was black.  Or try to explain that the profile of the typical “lone wolf” mass shooter is a white male between the ages of 19 and 35.

Since 2015, more than 70 unarmed black men have been shot by the police. But from 2015 to the present, nearly all white perpetrators who were arrested for a crime (including Dylann Roof, the young man who killed 9 parishioners at a South Carolina church) were taken into custody – alive.

Meanwhile, examples of black valor continue to surface. They include:

The Subway Superman – On a cold, winter morning in 2007, Wesley Autrey, age 50, leapt off the platform of a New York City subway to save a stranger having an epileptic seizure. A train was approaching ─ its horn wailing and lights flashing – leaving Autrey only 22 seconds to hoist the man off the tracks. So, he did the unthinkable. Lying on the man’s back, he wedged himself between the rails and into the 21-inch gully beneath. Within an instant, the train passed over their bodies and both men survived.

The Unknown Hero – In 2010, an unidentified black man pounced onto the subway tracks and saved the life of a woman who had fainted and fallen onto the path of an oncoming train. Perhaps inspired by Autrey’s feat, he positioned the woman in a safe spot inside the trench. He finished this good deed seconds before the train came barreling through New York’s Union Square Station. Then he vanished without leaving a name or any contact information.

The Daring Young Bikers ─ During the summer of 2013, 15-year-old Temar Boggs and Chris Garcia, 13, heard that a five-year-old girl in their neighborhood had been abducted from her front yard. The Lancaster, Pennsylvania teens jumped on their bikes and tracked down a vehicle that fit the description of the kidnapper’s sedan. They pursued it until the driver stopped, released the little girl and sped away.

The Waffle House Hero ─ James Shaw Jr. had just walked into a Tennessee Waffle House one Sunday morning in 2018 when a crazed killer opened fire, murdering four patrons and injuring four others. Shaw refused to cower.  As the gunman paused, he tackled him and wrestled the assault rifle out of his hand. The suspect fled and Shaw is credited with saving countless lives.

The Paris Spiderman ─  Mamoudou Gassama didn’t think twice. A toddler was dangling from the balcony of a Paris high-rise apartment building and a crowd had gathered below, pointing and screaming. Gassama sprung into action – despite the chance of exposing his undocumented immigrant status. Without the aid of levies or ropes, the Mali-native scaled the building, pulling himself up four, steep stories until he reached the frightened child. His 2018 Mission Impossible-style venture was viewed by millions on youtube.

The list goes on, and it’s impressive enough to make a case against implications of black inferiority and rallying calls for white supremacy. But arguments like that state the obvious. Of course, flaws don’t recognize racial boundaries, and neither black men nor white men are perfect. No one is. But, if the selfless actions of these champions have affirmed anything, it’s that black men should not be underestimated.

At their worst, they are mired in poverty, soured by a system that has failed them and sinking in the quicksand of street justice. But when they’re at their best, they exemplify a faith, zeal and strength that is unparalleled.

Clearly, compassion was rippling through the hearts of those three, British middle schoolers. Sparks were simmering in the spirit of the acrobatic, Paris Spiderman. And a volcano must have erupted within James Shaw the moment he set foot inside that besieged Waffle House.

Black men are tired of backing down. They’re reframing their image and demonstrating their might. They know there are plenty of skeptics who don’t believe they can be heroes.

And they are proving them wrong.

View all posts by denisecrittendon

2 thoughts on “THE UNSUNG VALOR OF BLACK MEN”